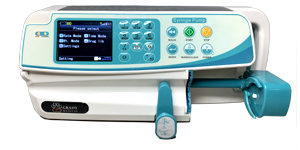 It automatically recognizes the size and type of your syringes without any manual input, which includes pre-calibration for Monoject syringes.

1. Microcomputer System: the brain of the 8900 system, plenty of automated features and detailed parameters for universal compatibility and operation.

2. Pump Body: the heart of the whole system and the driving force of transfusing medical liquid. It uses a step-motor driving-screw mechanism to push the syringe plunger forward

3. Detection Device: Containing smart-detection sensors, including an ultrasonic sensor (for detecting motor running and reversing), pressure sensor (for detecting occlusion). Detect corresponding signals, which
after being amplified and transferred to microcomputer system for signal processing, automatic detection and operation is triggered.

4. Alarm System: Signals that are detected by the sensor, after being processed by the microcomputer, trigger alarm control signals. At the response of the unit’s alarm system, operator is notified. Alarm is composed of 2 parts, including photoelectric alarm (light emitting diode) and audible alarm (loudspeaker and
buzzer) etc.